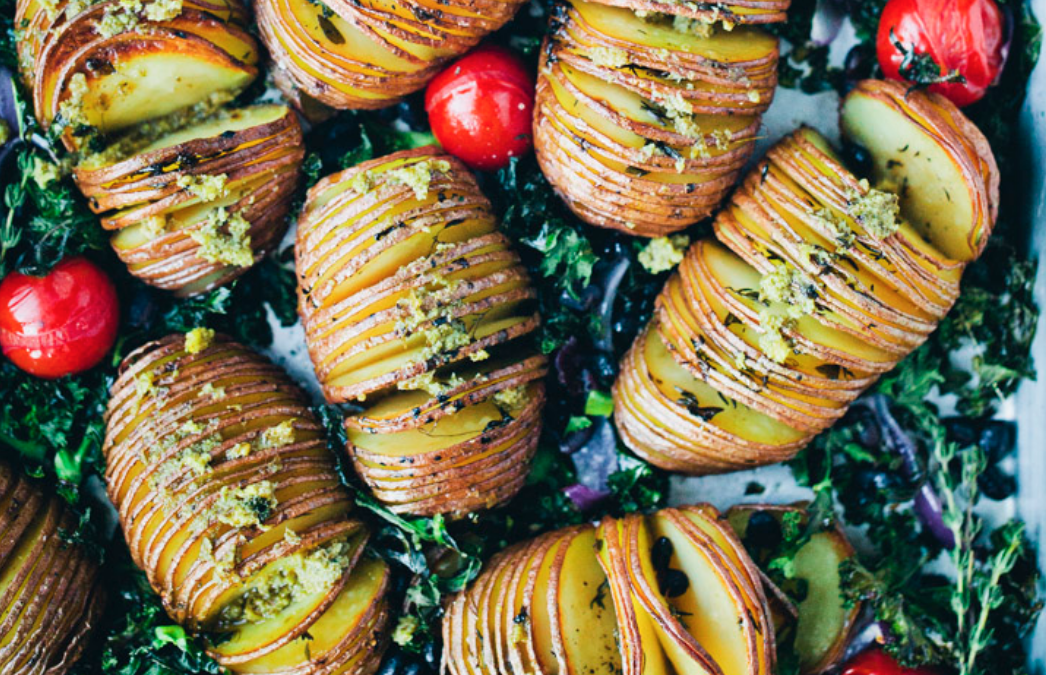 1. Preheat the oven to 200°C.
2. Wash and scrub the potatoes.
3. Slice each potato thinly. Let each slice cut about two-thirds into the potato, leaving the bottom intact. This is easiest done by placing the potatoes inside a large spoon, the edges of the spoon will then stop the knife from cutting too deep.
4. Tuck some thyme leaves sporadically between the slices of each potato and place them on a baking tray.
5. Use a brush to drizzle the potatoes with about half of the oil and then sprinkle with salt and pepper.
6. Bake for 30 minutes and then brush the potatoes with the remaining olive oil. The potatoes should have started to fan out slightly which will make it easier to get some of the oil down in-between the slices as well. If the slices are still stuck together, you can let them roast a while longer before adding the last oil.
7. Bake for 30 minutes more. Meanwhile, cut the onion in thin slices and place it in a bowl along with the beans and tomatoes. Drizzle with olive oil, salt and pepper and toss to combine.
8. When the potatoes have been in the oven for about 1 hour in total, arrange the onion, beans and tomatoes on the tray, around the potatoes and bake for 15 minutes more, or until the potato edges are crispy and the centre feels soft when pierced with a toothpick.
9. Drizzle pesto over the potatoes and serve immediately, while still hot.

We deliver to Uralla, Armidale, the Invergowrie Store, Walcha, Bendemeer, Moonbi, Kootingal, Nemingha, Calala and Tamworth for a flat rate of just $5.50

Want to hear from us occasionally?